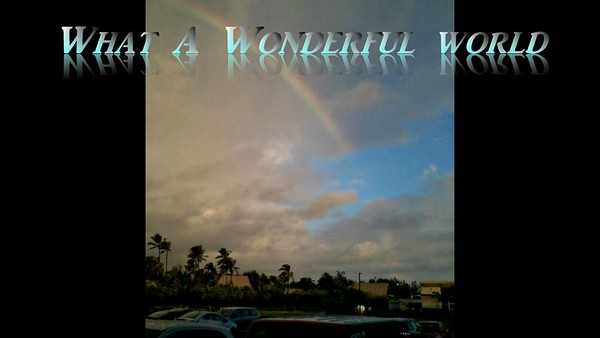 “What A Wonderful World” by Sal 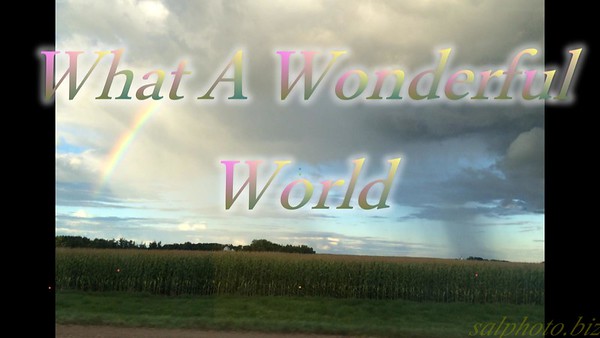 What A Wonderful World (sick version) by Crazy lil’ Sal

”
I see trees of green, red roses too
I see them bloom, for me and you
And I think to myself, what a wonderful world.

I see skies of blue, and clouds of white
The bright blessed day, the dark sacred night
And I think to myself, what a wonderful world.

The colors of the rainbow, so pretty in the sky
Are also on the faces, of people going by
I see friends shaking hands saying, ‘how do you do’
They’re really saying, ‘I love you.’

I hear babies cry, I watch them grow
They’ll learn much more, than I’ll never know
And I think to myself, what a wonderful world

Yes I think to myself, what a wonderful world.
Oh yeah…”

Louis Armstrong: What a wonderful world

What a Wonderful World From Wikipedia, the free encyclopedia
“…History

Intended as an antidote for the increasingly racially and politically charged climate of everyday life in the United States, the song also has a hopeful, optimistic tone with regard to the future, with reference to babies being born into the world and having much to look forward to. The song was initially offered to Tony Bennett, who turned it down.[3] Thereafter, it was offered to Louis Armstrong. George Weiss recounts in the book Off the Record: Songwriters on Songwriting by Graham Nash that he wrote the song specifically for Louis Armstrong. Weiss was inspired by Armstrong’s ability to bring people of different races together. The song was not initially a hit in the United States, where it sold fewer than 1,000 copies because ABC Records head Larry Newton did not like the song and therefore did not promote it,[4] but was a major success in the United Kingdom, reaching number one on the UK Singles Chart.[1] In the US, the song hit No. 116 on the Billboard Bubbling Under Chart. It was also the biggest-selling single of 1968 in the UK where it was among the last pop singles issued by HMV Records before becoming an exclusive classical music label.[5] The song made Louis Armstrong the oldest male to top the UK Singles Chart, at sixty-six years and ten months old.[1] Armstrong’s record was broken in 2009 when a cover version of “Islands in the Stream” recorded for Comic Relief—which included the 68-year-old Tom Jones—reached number one in that chart. Tony Bennett did go on to cover “What A Wonderful World” several times, as in 2003 with k.d. lang, paying homage to Bennett’s friend Armstrong.

ABC Records’ European distributor EMI forced ABC to issue a What a Wonderful World album in 1968 (catalogue number ABCS-650). It did not chart in the US, due to ABC not promoting it,[6] but charted in the UK where it was issued by Stateside Records with catalogue number SSL 10247 and peaked on the British chart at No. 37…”

“What A Wonderful World”
Louis Armstrong:1967-68 pophistorydig.com
“… The song first charted in the U.K. in February 1968 at No. 45, rising to No. 1 by April, staying there for four weeks. In fact, “What A Wonderful World” became the top-selling UK single in 1968. Back in the states, ABC’s Larry Newton refused to promote the song, and it reportedly sold only 1,000 copies.

But 1968 in the U.S. was turning out to be a very tumultuous year, with racial and political havoc added to the Vietnam War. It was also a presidential election year. Martin Luther King, Jr. and Robert Kennedy were both assassinated that spring and summer, and there was growing civil and racial unrest with urban riots and Viet Nam War protests.Some thought Armstrong’s song could be a positive antidote for the troubled world of 1968. In the midst of all this, songwriters Thiele and Weiss saw Armstrong as “the perfect ambassador to restore race relations” during America’s tumultuous summer. Yet since the 1950s, Armstrong had been charged by some as being an “Uncle Tom,” catering to white America with his music. But Armstrong’s appeal at the time extended to all races, and the hope was that a 66-year-old singing a tune of goodwill on the airwaves might make a difference. Armstrong also felt the song needed to be heard in the country to promote a sense of hope and optimism. He loved the song and performed it everywhere, including numerous television appearances, and its popularity began to grow. At one performance, he reportedly introduced the song with this explanation:

“Some of you young folks been saying to me: ‘Hey, Pops – what do you mean, what a wonderful world? How about all them wars all over the place, you call them wonderful?’ …But how about listening to old Pops for a minute? Seems to me it ain’t the world that’s so bad but what we’re doing to it, and all I’m saying is: see what a wonderful world it would be if only we’d give it a chance. Love, baby, love. That’s the secret…”

In October 1968, EMI forced ABC to release a U.S. album with the recording, but like the original single, it was never promoted for radio or retail, and did not do well. After Armstrong passed away in July 1971, dying of heart failure at the age of 69, the record was re-released and enjoyed modest success. But it wasn’t until 1988, more than 20 years after its first recording, that the song found a bigger audience and grew in stature…”